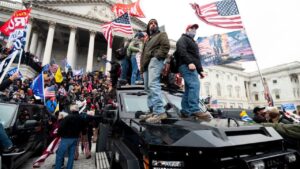 The U.S. House Select Committee that is looking at the why, the what and the who of 1/6 is a serious panel that needs to be taken seriously.

The committee has issued 11 more subpoenas aimed at corralling key aides and advisers to Donald J. Trump. It wants to know what they knew about the events leading to the riot that exploded on Capitol Hill.

The 45th POTUS is going to try to prevent them from answering the demands from the panel. He won’t succeed, given that he no longer possesses any presidential power of the type he wielded in keeping other key aides from talking to those who examined the man’s time as president.

Too bad, Mr. Former Liar in Chief. He now is just one more corrupt private citizen who is being forced to face down those who seek the truth behind what happened on the day POTUS 45 exhorted the rioters to storm the Capitol.

I am guessing the 11 subpoenas we saw issued today will be just a fraction of the number of demands yet to come. Good hunting, select committee members.