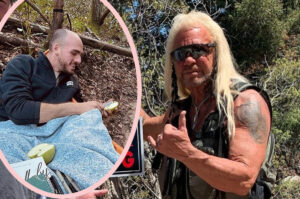 If Dog the Bounty Hunter is able to bring Brian Laundrie in alive, I guess I am going to give the dude his due as a celebrity sleuth.

They brought in the fellow aka Duane Chapman to help find Laundrie, a “person of interest” in the death of Gabby Petito, who was Laundrie’s fiance.

I have suggested that Laundrie is dead. That they’ll find him in a gator’s gut eventually, given that he had been hiding — supposedly — in a Florida nature preserve.

But … what do I know? Not a damn thing if we’re going to believe Dog the Bounty Hunter.

Hey, I usually just blow this clown off — that would be Dog — as he traipses around on TV looking for bad guys. This time, if he delivers a notorious person of interest, I guess I’ll just have to give him all the respect he deserves.