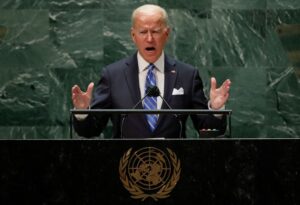 Joseph R. Biden Jr. stood before the United Nations today and delivered the kind of speech Americans — and those around the world — hadn’t heard delivered from a U.S. president in some time.

He spoke of diplomacy, of global warming, of human rights, of an end to U.S. warfare. President Biden delivered a reasoned, rationale, coherent speech to the U.N. General Assembly that was devoid of name-calling — such as “Little Rocket Man” — and some of the curious statements that would fly out of the mouth of Biden’s presidential predecessor.

To be sure, the current president has a heaping plate full of trouble. We have a refugee crisis on our southern border. We are still trying to finish extricating ourselves fully from Afghanistan. The nation is battling a COVID-19 pandemic that many of us thought was whipped four months ago.

To hear the president’s tone, though, in a speech to the world’s No. 1 diplomatic body seems to signal a return to normal diplomatic procedure, the kind of thing he promised when he ran for president in 2020.

Yes, President Biden is struggling at home. The political forces that keep digging in against him are fierce, determined and dogged in their effort to torpedo everything the wants to do.

However, I remain determined to offer my support in the efforts this president is making to repair the wreckage left by his predecessor.

Today’s speech at the U.N. took us another step toward that end.