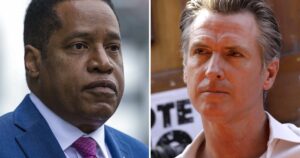 Republicans who will get their heads handed to them in California have begun reciting another version of The Big Lie.

They want to boot Democratic Gov. Gavin Newsom out of office. They’re having an election tonight. Newsom will keep his hold on the governorship.

The Big Lie being resurrected by the GOP is that the result is “rigged.” It’s corrupt, they say. They are cutting their own throats by suggesting that the electoral process is not to be trusted.

I’ll be glad to sharpen the rhetorical blade for them.

The leading Republican who is challenging Newsom is radio blowhard Larry Elder. He won’t ascend to the governor’s office. Elder knows it. However, he is now offering the “rigged election” defense for the fact that Newsom’s campaign caught fire in recent days and appears poised to put down this ridiculous recall effort.

I have to say that the “rigged” allegation before any votes are counted does require a huge suspension of disbelief.

Except for this: The GOP out west has ripped a page right out of the playbook used by the disgraced, twice-impeached former POTUS.

Spoiler alert: The California election is not “rigged.”