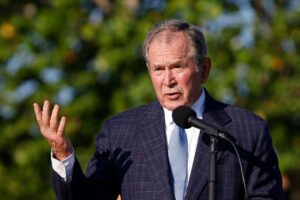 Former President George W. Bush told the world a blunt truth while honoring the heroes who confronted foreign terrorists on 9/11.

“We have seen growing evidence that the dangers to our country can come, not only across borders, but from violence that gathers within,” Bush said in a speech Saturday to commemorate the 20th anniversary of the 9/11 attacks at the Flight 93 Memorial in Shanksville, Pa.

“And it is our continuing duty to confront them,” Bush added.

Yes, Mr. President. It certainly is our duty.

Sadly, tragically and to his everlasting shame, one of President Bush’s successors not only has failed to “confront” the enemy within, he has encouraged them to act. I refer, of course, to the 45th POTUS — the dipsh** who shall remain nameless in this blog.

I understand that President Bush’s remarks have been hailed by Democrats and irked supporters of the 45th POTUS. Hmm. Imagine that, if you dare.

I cannot help but wonder why in the name of all that is holy does anyone object to the words of a former wartime president on whose watch we sought to confront international terrorists. Of course he is correct about the threat of domestic terrorists. He echoed the words spoken two years ago by FBI director Christopher Wray — appointed by POTUS 45 — who said the same thing about the domestic terrorism.

I will stand with President Bush on this one.