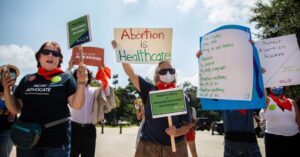 Now that Texas Gov. Greg Abbott has declared his intention to “eliminate rape” from Texas, I have this overwhelming need to remind him of something else.

He won’t be able to eliminate abortion, either.

Indeed, what the governor and the Republican-dominated Texas Legislature have done is spur desperate women to take desperate measures to terminate a pregnancy. Their measures could kill them.

Abbott signed a law that disallows abortion later than six weeks into a pregnancy. Most women, from what I understand, don’t even know they are pregnant that early.

What is the most egregious element of this law is that it does not allow for any exceptions for rape and incest victims. A woman gets raped or is entangled in an incestuous encounter and become pregnant by her attacker? Tough sh**, lady! You have to give birth to that child.

What, though, might she do? She could go to a medical quack who could perform what they call a “back-alley abortion.” What happens then? Only God Almighty knows.

This is the kind of world that awaits women who might seek to end a pregnancy. It is cruel. It is inhumane. It also speaks to the profound hypocrisy of our state’s political leadership, which proclaims itself to be “pro-life” as it regards the unborn but ignores the needs of sentient human beings who are being told they must carry a pregnancy to full term while enduring enormous heartbreak along the way.

Reports have poured in that Mexico’s supreme court has declared abortion to be legal. Will Texas residents flee across our border to seek an abortion in a country that doesn’t criminalize that act? Or will they merely go to neighboring states in this country where they can end a pregnancy without the threat of being arrested and jailed? Yes, those options await some women.

Those who cannot afford to travel or who are unable to make contact with medical professionals are left to take desperate measures.

Our Legislature and our governor have performed an act of cruelty.