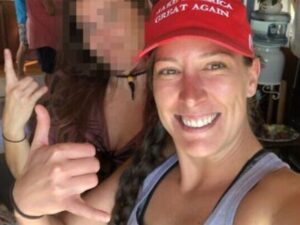 Ashli Babbitt was a casualty of 1/6.

She died while trying to break into the Capitol Building, along with several thousand of her fellow terrorists/rioters/insurrectionists. A Capitol Police officer shot her to death.

Well, today the Capitol Police internal investigation released its decision, which is that the officer did nothing wrong. That Ashli Babbitt was killed by an officer performing his lawful duty to protect the nation’s seat of government.

Now, is this the end of it? Hardly.

I fully expect there to be plenty of growling and grumbling from those who believe the officer went beyond his orders to protect the Capitol Building.

I want to be clear on a couple of points. I am saddened that the 35-year-old Babbitt died in the melee. However, the Air Force veteran was breaking the law at the time of the incident. She was trying to smash her way into Speaker Nancy Pelosi’s office lobby when the officer, a lieutenant with the Capitol Police force, fired his weapon at her.

No one should have been died or been injured in the chaos that unfolded on 1/6. Then again, the mob should not have stormed into the Capitol Building, beaten security officers with poles, or sprayed them with chemicals, or crapped on the floor of Congress. Nor should they have been threatening to “Hang Mike Pence!” or sought Speaker Pelosi by chanting her name in that frightening cadence we all could hear on the audio recordings taken of the event.

Pelosi has impaneled a House select committee to examine all the details of the 1/6 attack on our government. She vows a thorough probe. Congressional Republicans oppose this investigation for reasons that seem clearer by the day: They don’t want to be implicated in any fashion by what the panel determines.

Now, though, we have completed one key element in that probe. The investigation into Ashli Babbitt’s death will go down as a tragic consequence of the riot that sought to overturn the 2020 presidential election.

2 thoughts on “Officer acted correctly on 1/6”