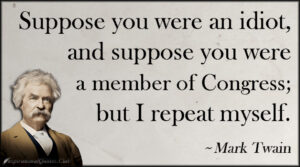 I daresay none of them holds a candle to the stupidity he is facing now that he has attained the nation’s highest political office. It is a remarkably stubborn foe that Biden must defeat.

The problem he faces, though, is determining how he can speak past  the terminally stupid among those who continue to insist that he didn’t actually win the 2020 presidential election.

Of course he did. He won it bigly. President Biden garnered 7 million more ballots than the other guy. His Electoral College victory, while not a landslide, mirrored the total that the other guy won when he captured the presidency in 2016.

And yet, the president seeks to persuade all of America that he has a plan to jumpstart the economy, restore our role as the world’s leading nation, that we need to battle the existential threat posed by climate change and, oh yeah, rid us of the pandemic that at the moment is raging anew.

Only a little more than half the country is ready to buy in. The rest of us, that significant minority of Americans? Many of them are wallowing in the stupidity uttered by their hero, the defeated — and twice-impeached — former POTUS.

Actually, the impediment to President Biden’s effort to rebuild trust in our government involves more than just stupidity. It includes a dangerous dose of evil intent among those who keep fomenting The Big Lie about the 2020 election. Stupidity and treasonous tendencies comprise a dangerous combination.

So it is against those headwinds that Joe Biden is struggling to repair the wreckage brought by his immediate predecessor. All those fights during his 36 years in the U.S. Senate and his eight years as vice president during the Barack Obama administration seem today to be almost quaint.

Stupidity is proving to be the most stubborn foe of all.