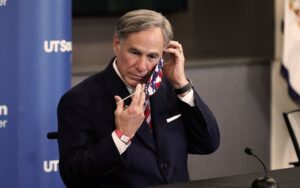 I am willing to admit that there are a lot of things in this cold, cruel world I do not  understand.

One of those things is the nutty notion that Texas Gov. Greg Abbott has embraced by declaring that only he can tell local governments how to react to the surge in infection from the COVID pandemic and its associated variants.

Several large independent public school districts — starting with Dallas, Fort Worth, Austin and Houston — have defied the governor. They have ordered everyone in their buildings to mask up. To which I say, “Good for you!”

My 8-year-old granddaughter started school today in Allen. The Allen Independent School District hasn’t followed the lead set by its bigger district neighbors in Dallas and Fort Worth. The kids aren’t being told they must wear masks while sitting in class, or walking into the cafeteria, or goofing off with their friends in the hall.

I have to ask: What in the name of preventive measures is Abbott thinking when he issues those no-can-do orders to local jurisdictions?

I used to talk occasionally to Gov. Abbott when he was a mere Texas Supreme Court justice and later state attorney general. He ran for governor the first time after I left the daily journalism world, so I haven’t had a ringside seat to watch his morphing from a reasonable Republican into some sort of cultist who follows the example set by the 45th POTUS.

I am left merely to shake my head in disbelief and amazement that he has put our children’s health in peril — and that includes my precious granddaughter — by telling school systems they are forbidden from taking measures they believe will save lives.