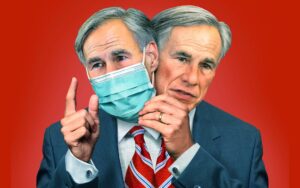 Greg Abbott didn’t strike me as a politician who would rule with an iron hand, a clenched fist when he ran for Texas governor and then got elected in 2014.

I knew him as a Texas Supreme Court justice and then as Texas attorney general. He always seemed like a reasonable, thoughtful conservative Republican.

Now he’s governor and now he is acting like — oh, I don’t know — The Great Dictator. The latest example comes in the form of his refusal to let cities, counties and “independent” school districts decide on whether to require masks for their constituents.

Abbott insists that his statewide ban on mask-mandating stands. He won’t allow a county judge, a mayor, a school superintendent or school board president to decide whether the Delta variant of the COVID virus in their communities requires them to re-impose mask mandates.

Abbott seems to be saying, “There’s nothing to see here.”

Except that there is plenty to see. Texas and Florida account for the largest share of the Delta variant COVID infections. Memo to Greg: We ain’t doing too well, governor, in vaccinating Texans. Our dismal vaccination rates account for the spike in new infections in Texas. What that tells me is that the Texas governor should reel in his dictatorial tendencies, given that they aren’t working well enough to stem the infection that has gripped the state a second time.

What’s more, I always have understood one key element of Republican political orthodoxy to mean that “local control is best,” that local governments need not be dictated to by those in state capitols, let alone those in Washington, D.C. I guess I was mistaken.

Gov. Abbott is pushing back on President Biden’s insistence that the surge in infections is a “pandemic of the unvaccinated.” Greg Abbott is seriously mistaken if he believes he knows better than communities spread across this vast state how to cope with a potentially unfolding tragedy.