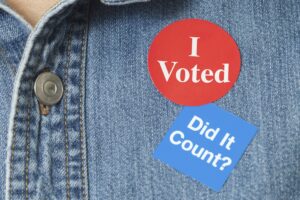 The 45th president of the United States likely did the nation a favor when he ran for the office in 2016.

You’ll recall how he suggested that the vote totals that Hillary Rodham Clinton received were the result of undocumented immigrants voting for her. He was wrong, of course. That didn’t happen. The 2016 election was not corrupt. Clinton, let’s remember, polled about 3 million more votes than the guy who won the election on the basis of his Electoral College victory.

So, why is the former Liar in Chief continuing to foment The Big Lie about corruption? Indeed, he fired Krebs after he made that declaration. I am left, then, to wonder why POTUS 45 would dismiss someone who did his job as prescribed.

I suppose it must be that Krebs didn’t deliver some kind of perverted message that suggested that despite the security, the protections against voter fraud that the wrong guy won the election.

Well, the right guy won. POTUS 45 lost a secure election. Yet he continues his quest to get it overturned. It is a shameful demonstration of egomania the likes of which no one likely never has seen in a former POTUS.

The ex-Imbecile in Chief keeps pounding on that drum. He can do so until hell freezes over. It won’t change the outcome, which happened to be a product of the ex-POTUS’s own making.

One thought on “Most corrupt election? Hardly! It was most secure”