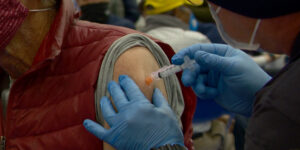 There can be no excusing or even forgiving many prominent Republican U.S. politicians’ shameful denigration of the effort to vaccinate Americans against the COVID-19 virus.

Still, it is with a qualified feeling of gratitude that I welcome their insistence now that it is time for all Americans to get vaccinated.

Senate Republican leader Mitch McConnell arguably is the most prominent GOP pol to climb aboard the vaccine bandwagon. Others are singing from that song sheet: U.S. House whip Steve Scalise, Sen. John Cornyn of Texas, even Kevin McCarthy, the embattled House GOP leader. They’re on board, too.

It wasn’t that many weeks ago in which some GOP politicians were dismissing the vaccine. Some of the nut jobs among the Republican congressional caucus — namely the QAnon and Freedom Caucus cabal — continue to actually applaud Americans’ decision to forgo vaccination.

They are the loony birds among the politically powerful elite who hold tremendous sway among too many American voters.

President Biden laments the “pandemic among the unvaccinated” that is driving up infection/hospitalization/mortality rates in the country. Biden is fighting a GOP contingent in Congress and in statehouses across the nation that are arguing an opposite message. The sad truth is that the anti-vaxxers are winning the argument … at least for the time being.

A glimmer of good news, though, is surfacing among many Republican politicians who have decided that the more of their followers who get sick and possibly die from the virus, the less strong their political power base remains.

If they can persuade enough Americans to turn the tide against the variant that is sickening so many of us, then I might be willing to forgive them for their utter irresponsibility.