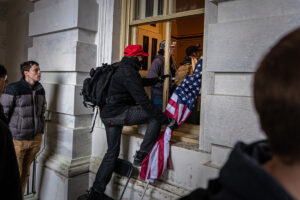 For several months now, I have been referring to the Jan. 6 riot as an “insurrection,” a term that reportedly gives congressional Republicans a case of the heebie-jeebies.

Senate Republicans didn’t like the term inserted into legislation that called for creation of an independent bipartisan commission to investigate the cause and effect of the insurrection; it also would have sought remedies to prevent it from happening in the future.

Well, you know what? I will continue to call it what it was: an insurrection against the government of the United States of America.

It was nothing short of that. It was a direct frontal assault on the very democratic process which on that day was certifying the results of the 2020 presidential election that resulted in Joe Biden and Kamala Harris  being elected president and vice president of the United States.

The ticket led by the 45th POTUS incited the insurrection, for which the House of Representatives impeached him for a second time. It was a big more of a bipartisan impeachment than the first go-round, with a handful of Republicans joining their Democratic colleagues in impeaching POTUS 45; what’s more, some GOP senators ended up voting to convict the disgraced ex-POTUS at trial.

My point, though, is that no one should shy away from calling the DC riot what it was: an act of insurrection against the government of the United States. For the GOP congressional caucus to dig in against the investigative commission because they dislike truth-telling language is a cheap and shallow attempt to deny the obvious.

The effort to get at the truth behind the insurrection must not end. The House has formed a select committee. It already includes one Republican House member; others should join the effort.

Let’s not be coy about what’s at stake. It is to find a way to prevent future insurrections from occurring.

One thought on “It was an ‘insurrection’”