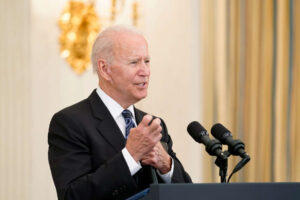 President Biden well might beat himself senseless with this initiative but he deserves credit for bringing needed attention to a national scourge.

That would be gun violence.

Biden says clearly that “it has to end.” To be sure, the president is getting push back from — get ready for it — the Republican caucus in Congress. GOP lawmakers blame the progressive movement and its “defund the police” mantra for the spike in gun violence. I guess that means Republicans won’t do anything about it. They’ll continue to sit on their hands, continue to obstruct any effort to legislate a remedy to what has become an all-too-common event: mass shootings.

USA Today reports: “Folks, this shouldn’t be a red or blue issue,” Biden said in the White House State Room. “It’s an American issue. We’re not changing the Constitution. We’re enforcing it, being reasonable. We’re taking on the bad actors doing bad and dangerous things in our communities.”

In a speech from the White House, Biden announced a “zero-tolerance policy” for rogue gun dealers and a new focus by the Justice Department to try to stop the illegal sale of firearms.

Biden also emphasized that cities and states can use their portions of $350 billion in direct aid from Biden’s COVID-19 rescue plan, approved by Congress in March, on public safety efforts, including hiring more police officers.

So, the resistance will come from those in Congress who believe liberals are to blame, which gives them a pretext to oppose legislation that seeks to target bad actors out there who contribute to the carnage.

It’s hard to say how much of an impact President Biden’s initiative will have on the plague of gun violence. But my goodness. Why in the world must this resistance continue to obstruct good-faith efforts to deal forthrightly with what every sensible American must believe is occurring on our streets?

I have no intention of giving up this fight and I will continue to stand with those in power who see gun violence against innocent Americans as the existential threat it has been for far too long.