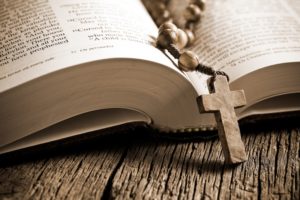 So, with that I want to venture briefly into some dangerous rhetorical territory. Some Catholic bishops want to deny President and Mrs. Biden communion because of their views on abortion.

Catholic Church doctrine opposes abortion. Period. It is not a debatable point. President Biden believes women deserve to have the right to choose whether to terminate a pregnancy, which is against church doctrine. Some bishops want to deny serving him communion at Mass. Given that the first couple attends church regularly, well … that’s a big deal.

My quandary is this: The Bible I have read since I was a little boy does not set any sin above all others. Thus, abortion is no more serious a sin than, say, coveting someone else’s property or engaging in sloth.

How, then, do bishops justify weaponizing a particular sin by denying a politician communion which in effect declares that abortion is more punishable than any other sin? Is that in keeping with Biblical teaching?

5 thoughts on “No communion for POTUS?”