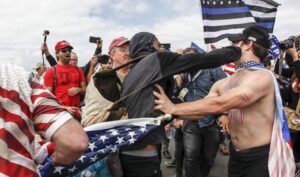 Yes, the headline on this blog is one of those no-brainers.

However, to hear the U.S. attorney general speak so forcefully about the threats posed by domestic terror reminds me of why I support this fellow and the individual who nominated him for the job, President Biden.

AG Merrick Garland continues to give voice to issues that need to be heard.

Just as he spoke the other day about the Justice Department’s commitment to ensuring that all Americans have access to the electoral process, he spoke again today about the existential threat posed by domestic terror.

We all saw that threat play out on Jan. 6 when the mob attacked the U.S. Capitol as members of Congress led by Vice President Mike Pence were certifying the results of the 2020 presidential election. Congressional Democrats and a handful of their Republican colleagues want a bipartisan commission to explore in detail the cause and effect of that insurrection. We know already what to call it: an act of rebellion against the government, incited by the immediate past president who continues to foment The Big Lie about the election being “stolen” from him.

The men who served as attorney general under the former president’s single term in office did not speak with anything approaching the passion and eloquence about domestic terrorism that AG Merrick Garland has done.

“We will never take our eyes off the risk of another devastating attack by foreign terrorists,” he said in remarks delivered today at the Justice Department. “At the same time, we must respond to domestic terrorism with the same sense of purpose and dedication.”

CBS News reported: Administration officials, in briefing reporters on the strategy, pointed to an increase in politically, ethnically, and racially motivated acts of domestic terrorism in the U.S. over the years, including the congressional baseball shooting that took place four years ago this week, when a shooter opened fire on members of Congress because they were Republican.

So it must proceed. FBI Director Christopher Wray has called domestic terrorism an even greater threat to Americans than terrorists from abroad. It is time to respond accordingly.