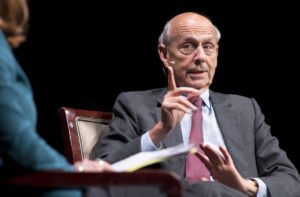 Someone will have to explain to me why congressional progressives are getting all wound up over whether Supreme Court Justice Stephen Breyer needs to retire.

As in this summer when the current term ends.

Breyer is one of them. He’s a progressive justice on the nation’s highest court dominated these days by conservatives. The right wing holds a 6-3 majority on the high court. Breyer usually votes with the liberal wing comprising justices Sonia Sotomayor and Elena Kagan.

Breyer is getting a bit long in the tooth to be sure. He was nominated by President Clinton in 1994 and was approved overwhelmingly by the U.S. Senate.

Liberals in Congress want him to retire, paving the way for President Biden to select another — presumably much younger — liberal justice.

I need to stipulate that a Breyer retirement and an appointment by Biden won’t change the court’s political tilt. It would remain  6-3 conservative-leaning panel.

Among the progressives calling for Breyer’s retirement, quite naturally, is the New York firebrand U.S. Rep. Alexandria Ocasio-Cortez, the second-term congresswoman who — for reasons that escape me — has become the go-to voice among progressives in Congress.

I have argued that Justice Breyer needs to listen to his own counsel on this one. That is why the framers created an ostensibly “independent” federal judiciary. Justices shouldn’t have to listen to others yap and yammer over what they should do. Do they stay or do they go?

As near as I can tell, Stephen Breyer still has his wits about him. He is able to do the job and he’s doing it well.

As for AOC and other progressives, they need to tend to their own business, which is writing laws and enacting them. The judiciary is an independent branch of government, which tells me that federal judges don’t need others to tell them when they should call it a career.