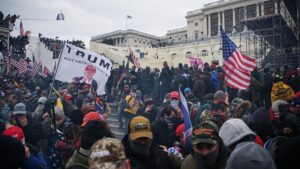 This must be noted with extreme vigor.

Whenever I see video of the Jan. 6 terrorist insurrection on the U.S. Capitol Building and hear mobsters declare themselves to be “patriots,” I want to scream at the top of my lungs.

The rioters who sought to dismantle the governmental process of certifying a duly constituted, legal and fair election were not patriots in any incarnation of the word.

I am a patriot. I pay my taxes. I follow the law. I have served my country in wartime. I am proud of my flag. I salute it appropriately. I am among many millions of Americans who consider themselves to be patriots. No one with whom I have any relationship ever would have done what the terrorists did on Jan. 6.

They stormed into the Capitol Building. They beat police officers with flags. They crapped on the floor of the halls of government. They shouted “Hang Mike Pence!” They posed physical threats to the leaders of our government.

Those are the actions of patriots? Would a patriotic American ever behave in such a reprehensible manner?

They were acting at the behest of a man who lost the 2020 presidential election. They were doing his bidding. Indeed, the ex-POTUS, the man who proclaimed his desire to put “America first,” instead put himself first.

They were patriots? They love the country? No. They do not. They detest the country and they deserve all the scorn that should come their way.

2 thoughts on “Rioters were not ‘patriots’”