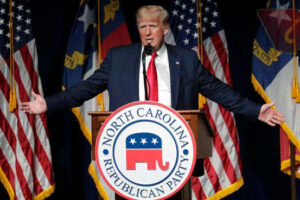 No one with half a brain in their skull ever thought Donald Trump would go away quietly into the night once he left the White House.

With that the ex-POTUS has criticized President Biden’s myriad policy decisions and then in a fascinating twist has called for China to pay “reparations” totaling $10 trillion because, according to Trump, the COVID pandemic began with a leak in a Chinese laboratory.

There you have it. The ex-president drawing conclusions and assigning blame well well before the world has a clue as to source of the killer pandemic.

Trump vows to be a player in Republican politics and said the “movement” he founded has only begun. Reassuring, yes? No … it isn’t.

According to the Wall Street Journal: The Democratic National Committee, in a statement, chided Republicans for sticking with Mr. Trump and said Mr. Biden is overseeing an economic recovery and “a return to normalcy.”

So the president will proceed. Trump will proceed, too, along his weird path toward what he believes will be a return to power. Trump will keep yammering. He will get the Trump Cult fanatics heated up.

Oh, and let’s not forget how Donald Trump will keep reciting the Big Lie about vote fraud and electoral theft.

2 thoughts on “Here he goes, calling for ‘reparations’”