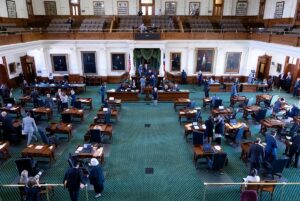 Show me a legislator from any state in the Union who enjoys a particular task that awaits them and I will show you a certifiable masochist.

That task has to do with redrawing the boundaries of the congressional districts that lie within that state as well as the state senate and house seats.

Such a task lurks just around the corner for the Texas Legislature, which is mandated by the U.S. Constitution to redraw those boundaries. It is, to put the kindest face on it, arguably the most arduous task that legislators have to perform. Here, though, is the good news: They only have to do it once every 10 years, when the Census Bureau counts every resident of every state in the nation.

Texas’ count of residents has produced two additional congressional seats for the Lone Star State, giving the state 38 members of the U.S. House of Representatives. The House delegation count plus the two U.S. Senate seats gives Texas 40 electoral votes for the next presidential election.

I want to accentuate a term: that would be “resident.” The Constitution stipulates in clear and concise language that the census must count every person who lives within our borders. It doesn’t limit that count to just U.S. citizens, card-carrying Americans.

But what lies ahead for the Legislature? I once knew a Texas state senator, the late Teel Bivins of Amarillo, who told me that redrawing these congressional and legislative boundaries, hands down, was his least favorite legislative duty. He hated doing it. Bivins, though, resisted any change to the way it is done, preferring to keep it in the hands of legislators. Bivins said that redistricting gave Republicans the chance to “eat their young.”

I asked Sen. Bob Hall of Rockwall, a fellow Republican, what Bivins might have meant by that. Hall said that the GOP primary usually is much bloodier than the general election, given that “Texas is such a Republican state.”

The 2021 Legislature will be charged with doing what the U.S. Constitution requires of it. Reapportionment won’t be any prettier than it has been in years past. Which brings me to this: What do legislators expect from a process that is supposed to produce two additional U.S. House seats, bringing the state’s electoral vote count to 40, second only to California, which is going to lose one House seat.

None of the Northeast Texas legislative delegation was on duty during the most recent redistricting effort, done after the 2010 census. The delegation, though, does have legislative experience, which I trust will stand the region in good stead as the process goes forward.

Sen. Hall, serving his second term in the Texas Senate, and who represents Senate District 2, said he has not been assigned to any relevant committee that will work on redistricting, but added that he would “serve on any committee the lieutenant governor wanted me to serve on.” He will get to vote on whatever the Legislature decides when it meets, as expected, in special session once the regular legislative session concludes at the end of the month.

Hall does not yet know what will occur when the Legislature reconvenes, but he believes the Senate district he serves well might expand a bit to the west into Collin and Dallas counties to make up for an expected population loss of around 3 percent. “The best I can tell is that we’re going to change our physical size,” he said. The eastern and western parts of the state are likely to expand geographically, Hall said, while the urban centers will shrink. Why is that? “That’s where the growth is occurring, along the I-35 corridor in the middle of the state,” he said.

This redistricting effort figures to be as cumbersome and potentially controversial as previous efforts, Hall acknowledged. “I cannot imagine how it won’t be,” he said. Hall noted that the Legislature must meet many requirements to assure that minorities get proper representation. “We need to present something that is fair and reasonable for everyone,” he said.

I would say that the upcoming effort at redistricting is “why we pay ‘em the big money,” except that Texas legislators – along with the lieutenant governor – get paid very little for doing the people’s work. I will hope they find the fortitude their predecessors always seem to have summoned to get this tedious and clumsy work done.

For now, all 31 state senators and 150 House members need to hold on with both hands.

NOTE: This blog item was published initially on KETR.org.