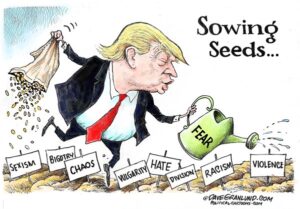 It pains me to think this, let alone say it out loud.

We have entered a dark, foreboding era where demagoguery and cultism are replacing serious policy discussion.

President Joseph R. Biden Jr. has replaced the most corrupt, inept, unfit, unqualified individual ever to hold the office of U.S. president. And yet the men and women who would follow Donald J. Trump to the gates of hell have, seemingly, done that very thing.

They are standing as obstructionists to a constructive agenda that President Biden seeks to craft for the nation. What’s even more frightening is that many of the Trumpsters are hiding behind the Big Lie that says the November 2020 election was pilfered from their guy. Thus, they demagogue themselves breathless, implying that Joe Biden isn’t a legitimate president.

Biden says he is willing to compromise with Republicans on the grand infrastructure package he has laid out there. It’s big, man. The GOP leadership in Congress has countered with a significantly smaller package. To be fair, it also represent a significant investment. Biden’s plan starts at $2.2 trillion; the GOP plan starts at $568 billion. President Biden says he is willing and ready to talk to Republicans about finding common ground.

Is the Republican congressional leadership listening to him? Not outwardly. They contend that Biden’s plan is a non-starter. They won’t raise taxes on rich people who saw their tax burden lightened in the 2017 GOP-led tax bill that Trump signed into law.

You want demagoguery? How about the nonsense the GOP keeps spouting about Biden’s “open border policy”? The border isn’t open. We are rounding up undocumented immigrants every hour of every day. Our immigration cops are holding them, trying to process them through a broken immigration system … that Joe Biden inherited.

From my perch out here the loyal opposition doesn’t look all that loyal in that it seems reluctant to negotiate in good faith with a president who seeks to employ those legendary legislative skills built over a professional lifetime in public service.

This is a dark time, folks. So help me I thought I saw flashes of light the day the nation turned Donald Trump out of office.

It must have been an oncoming freight train.

Am I giving up on the new president? Nope. Won’t happen. I intend to keep pushing, pitching and promoting a constructive agenda whenever the moment suits me.

At this moment, it suits me just fine.

2 thoughts on “Entering a dark era”