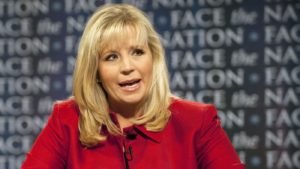 U.S. Rep. Liz Cheney does not lack political moxie. Nor does she lack the courage to fight back against the loons within her Republican Party who continue to foment The Big Lie that poured first out of Donald Trump’s mouth.

Cheney faces the prospect of losing her leadership post within the GOP caucus in the House of Representatives. Why? Because she isn’t backing down in her criticism of Trump’s Big Lie about the 2020 presidential election being “stolen” from him.

She said this on Twitter: The 2020 presidential election was not stolen. Anyone who claims it was is spreading THE BIG LIE, turning their back on the rule of law, and poisoning our democratic system.

The “anyone” to whom she refers would be the ex-POTUS himself.

I am going to stand with Rep. Cheney on this one, even though she represents — in most instances — the far right wing of a party in the midst of a civil war.

Cheney is on the right side of history. The Trumpkins who want her removed from her leadership post are flirting with disaster.