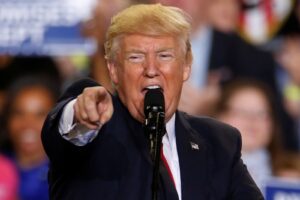 It is time to try to dispel any notion that Donald J. Trump is going to run for president of the United States in 2024.

I just cannot in any way, shape or imagined form see how the former president makes a credible case for his nomination by the Republican Party to run for POTUS.

Trump has a huge debt coming due, on the order of $400 million.

He continues to spew the Big Lie about alleged “theft” of the 2020 election.

Trump lost re-election in 2020 because voters across the board had gotten sickened by his incessant lying, his insults, his bullying, the chaos and confusion and his complete and unabashed incompetence when it came to governance.

How does a former president parlay any of that into something positive? How does he sell himself to an electorate that already has been exposed to this idiot’s self-aggrandizement.

Spare me the idiocy that he “controls” a huge portion of the GOP electorate. I will place my bet that the Trump “base” is going to shrink particularly if indictments are brought.

Oh, and then we’ll see what happens if former NYC mayor Rudy Giuliani squeals on Trump if federal prosecutors from the Southern District of New York hang a federal indictment on him.

Nope, the stars aren’t aligning well for Trump to make another run for the presidency. Which is more than just fine with me.

This guy just needs to get the hell out of our sight.