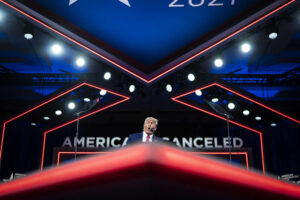 Donald Trump’s vise grip on the Republican Party remains a gigantic mystery to me.

He is, in no particular order:

And yet this guy continues to retain this grip on a political party he hijacked in 2016. He demands complete loyalty and those who are loyal to only to him give it willingly.

Thus, we are entering the netherworld between presidential election campaigns. Those who want to run for president must pledge their loyalty to Donald Trump or else be thrown to the wild dogs. How in the world do potential political opponents of Trump campaign against this guy … were he to declare his candidacy for the presidency again?

He bullies his GOP rivals by threatening to “primary” them in 2022. Trump already has drawn a bead on the likes of Sen. Lisa Murkowski of Alaska, who voted to convict Trump of inciting the Jan. 6 insurrection. Trump just cannot stand the thought of politicians adhering to the Constitution, of being more loyal to that document than to him.

How does he maintain that grip on the once-great party? How does he demand — and get — complete fealty from other egotists who also happen to serve in Congress?

It’s a mystery to me, man. So help me I cannot wrap my noggin around how this guy — of all guys — manages to perform this act of political bondage.