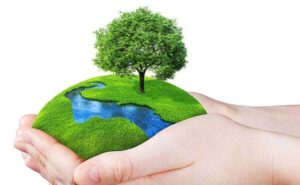 Our precious, precarious planet continues to be threatened by policies and behavior that places it in dire peril. What’s going on?

Earth Day is meant to bring the world’s attention to the only planet on which human beings can inhabit. Why don’t we celebrate this world of ours every single day?

I am not going to suggest that our household is doing anything extraordinary to protect our precious Earth, but we have embraced the notion of recycling with both arms. We hug the notion tightly. We now live in a community where recycling has become something akin to a way of life among the thousands of fellow residents of Princeton, Texas.

That is one small way we do our part to protect our planet.

To be clear, ours isn’t the only North Texas community that allows residents to recycle items. We are surrounded by small towns and mid-sized cities that also provide opportunities for residents to do their part, too. For that I am grateful.

Recycling material reduces the consumption of fossil fuels used to create this stuff from scratch by as much as 40 to 50 percent, as I have understood it over the years. It takes far less finite energy to re-use material than to manufacture it.

I am not going to say that every community’s embrace of recycling is going to save our planet by itself. I do offer the belief that human beings’ involvement in recycling that can contribute to the overall goal of preserving our planet’s resources and in keeping our environment clean enough for humans to continue living here.

Our government has returned to the community of nations’ effort to preserve our planet. President Biden’s executive order to return the United States to the Paris Climate Accord is a good first step. Donald Trump pulled us out of that international agreement, calling it intrusive and an impediment to business. Hmm. Well, many of us disagreed with Trump’s call and are welcoming Joe Biden’s involvement in this critical effort.

We are going to honor our Good Earth today. Schools will dedicate class time to remind our children of the need to take care of the planet. Our public airwaves will have programming aimed at doing the same thing.

Those of us who are able also will do our part by filling up our recycling bins with items that can be re-used and re-purposed with the goal of conserving our nation’s precious resources.

Happy Earth Day! Let’s remain vigilant and attentive to our planet tomorrow, too … and for as long as we all inhabit this place.