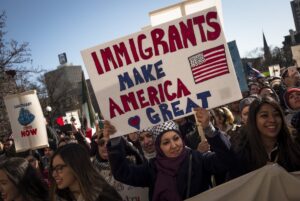 The most infuriating clause in the proposed America First caucus platform is the one that talks about what its adherents call “mass immigration.”

The so-called congressional caucus — pitched by far right wing conspiracy theorists and assorted loons in Congress — seeks to promote what they refer to as an “Anglo-Saxon culture.” Included in that is this despicable clause denigrating “mass immigration” from places I presume they mean do not fit the Anglo-Saxon stereotype.

I am a product of immigrants from southern Europe. All four of my grandparents chose to spend their lives in United States after moving here from Greece and Turkey. They were patriots. They worked hard. They played by the rules. They brought 10 children into this world among them. One of those children — my father — enlisted in the U.S. Navy on the very day that Japan attacked us at Pearl Harbor and dragged this country into World War II.

The America First caucus does not understand or appreciate the tenet to which all patriotic Americans should subscribe, that the very essence of American greatness and its “unique” culture rests in the hearts of those who choose to come here. I mean no disrespect for native-born Americans; hell, I was born here, too.

I just take profound offense at those in Congress who suggest that immigration — and immigrants — are somehow bad for the country. They all seek to “make America great again” by closing our doors, erecting walls across our southern border and issuing some sort of merit-based standard for those seeking to build new lives in the Land of Opportunity.

Had there been such a standard in force at the turn of the 20th century, I doubt any of my grandparents would have been allowed to come here, allowed to marry and allowed to build their own families.

Am I offended by this America First caucus? You’re damn right I am.