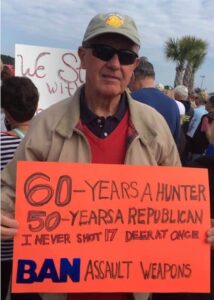 This picture showed up overnight on my Facebook news feed and by golly it pretty much sums up what I believe about assault weapons.

They have their place. They belong in the hands of fighting men and women who are in battle against enemies of the state. They are built to kill lots of people in rapid fashion. Should our military personnel carry them? Abso(freakin’)lutely, man!

What role does a weapon that packs dozens of rounds of ammo have in civilized civilian society? None. Zero. They are used too often by lunatics to kill innocent human beings in fits of rage.

So it is that this debate has been joined once again in the wake of the Indianapolis massacre at the FedEx facility. Eight people died in that mayhem before the lunatic shooter killed himself with the weapon he used against his victims.

Gun-rights enthusiasts/fanatics continue to harp on the notion that the Second Amendment guarantees their right to own whatever weapon they want to own. Even those that carry high-capacity magazines that the weapon can empty in seconds. For what purpose?

As the sign I posted with this blog item declares, it ain’t to kill lots of critters in the forest. Their intent is to kill human beings in short order.

I’ll be clear on this point: We shouldn’t hold our breath waiting for Congress to exhibit any semblance of sanity by banning these weapons. Nor should we expect any sign of courage among those who are willing to stand strongly against the gun lobby that keeps lying about what the Second Amendment allows.

2 thoughts on “Assault weapons have their place, but …”