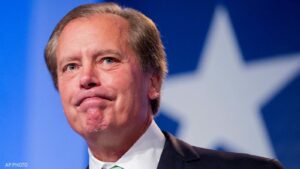 I don’t know. What I do know is that Texas’ former lieutenant governor was arrested by Dallas cops the other day on a domestic violence accusation. I want this to end well for Dewhurst, but if it doesn’t, well …

You see, he and I had a professional relationship that I recall with fondness. He is a Republican former politician who rose to prominence out of virtually nowhere back in the late 1990s. He had been a big-time political donor/back bencher in Houston when he ran for Texas land commissioner. He then gravitated to the lieutenant governor’s office in 2003, where he served until losing a re-election bid to Dan Patrick in 2015; Patrick is still the lieutenant governor.

David Dewhurst proved to be a formidable fellow while he served in state government. How so? He is the type of fellow who, when asked what time it is, is prone to tell you how to build a watch. He is as detail- and minutiae-oriented as any public official I’ve ever known.

I want to relate a quick story about Dewhurst that I think illustrates what a good guy — at a certain level — he can be.

My wife and I were in Austin once touring the State Capitol with my sister and her husband. We came upon a conference  room that was closed to the public. I asked a young man standing at the door what was happening inside. “Lt. Gov. Dewhurst is conducting a closed-door meeting,” he said. I cannot remember with whom. I gave the young man a business card and told him to say “hey” to Dewhurst for me. He said he would do that.

I got back to Amarillo and found a phone message from Lt. Gov. Dewhurst. He had called my office phone number and sought to find me so he could take me, my wife and our family members on a tour of his office complex in the Capitol Building. Dang! I’m still kicking myself that we didn’t hook up that day.

That’s the kind of relationship I had with him.

All that said, I hope David Dewhurst didn’t do what has been alleged.