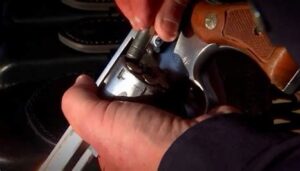 I will call it foolishness that carries some dire peril for many Texans.

The Texas House of Representatives has voted along partisan lines for a bill that will allow any Texas resident to carry a handgun around with them even without a permit issued by the state. Yep, the House – led by its Republican Party majority – wants to liberalize (if you’ll excuse that verb) the state’s concealed-carry law to enable anyone to pack heat on their person.

House Bill 1927 passed on an 84-56 vote and now goes to the Texas Senate, where it might meet some needed resistance, particularly from Lt. Gov. Dan Patrick, the Senate’s presiding officer and a politician who has expressed serious reservations about the bill.

I can’t believe I am going to say this, but I concur with Lt. Gov. Patrick’s squeamishness.

Texas’ concealed carry law has proven to be nothing close to the monster that many of us thought it would be when the 1995 Legislature enacted it. I opposed it then but grew to accept it over time. I feared an outbreak of road-rage violence involving those who were licensed to carry weapons. That hasn’t happened. For which I am glad and grateful.

Now this new law might be on the horizon. Texas does not require stringent knowledge of firearms to issue a concealed carry permit. Applicants need to take a brief course on firearm safety and pass a proficiency test with the firearm while of course clearing the necessary background check to ensure they lack a criminal record.

Why in the word, then, do legislators feel the need to allow everyone who lives here to pack heat without so much as a rudimentary test to acquire a permit?

As the Texas Tribune reports: Lt. Gov. Dan Patrick … has previously expressed hesitation over the measure, saying in 2017 … that “with all the police violence today we have in our state … law enforcement does not like the idea of anyone being able to walk down the street with a gun and they don’t know if they have a permit or not.”

I hope Patrick hasn’t swilled the gun-toting Kool-Aid and become a convert to the cause championed by gun-rights activists. Indeed, he ought to heed law enforcement officials who oppose this nutty notion. Newly hired Dallas Police Chief Eddie Garcia was among those speaking against the legislation, along with members of the clergy and veterans.

Texas has more than enough guns out there already. We already have a concealed-carry law that seems to work well enough.

The U.S. Constitution’s Second Amendment guarantees our right to “keep and bear arms.” The state’s provisions requiring Texans to take a test to demonstrate that they know how to handle a firearm ought to be enough to help keep these weapons out of the hands of those who shouldn’t have them.

NOTE: A version of this blog was published originally on KETR.org.