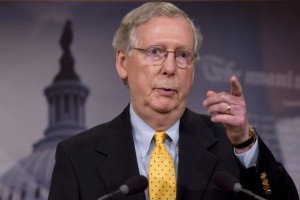 How much more verbal abuse can Mitch McConnell take from Donald Trump?

That’s my question of the moment after hearing what Trump said about the U.S. Senate Republican leader at that GOP donors dinner in Florida this weekend.

Trump called McConnell a “dumb son of a bi***” and a “stone-cold loser.” Oh, and Trump also lambasted other Republicans in the House and Senate who said some mean things about him, not to mention the insults he hurled at Democrats. Let’s not forget that Trump also trashed former Vice President Mike Pence because Pence didn’t do Trump’s bidding, which would have required him to violate the U.S. Constitution.

I ask this about Mitch because of something McConnell said about Trump shortly after The Donald left the presidency. He said — and this is astonishing — that he would “absolutely” support Trump were he to become the GOP’s 2024 presidential nominee.

He threw his support behind Trump after declaring that ex-POTUS was responsible for the Jan. 6 insurrection on Capitol Hill, that he “provoked” the mob of terrorists to storm the Capitol Building and prevent the counting of Electoral College votes certifying the election of Joe Biden as the next president.

So, McConnell endorses a possible — but in my view highly unlikely — Trump presidential candidacy. What does he get in return? Yet another verbal slap in the puss from the former Imbecile in Chief.