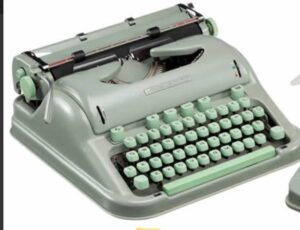 My 8-year-old granddaughter might not know what to call this device. You know what it is. I surely do.

I started work at my first full-time reporting job in Oregon City, Ore., in the spring of 1977. Our suburban afternoon daily newspaper still operated with these gadgets.

Indeed, my favorite moment of a day publishing our newspaper occurred around noon when every one of our staff of six reporters was pounding away on their manual typewriters. I was named editor of that little — and now defunct — newspaper a couple of years after arriving there. I used to stand aside while watching the staff work feverishly to get the copy turned in on time.

We finally advanced to desk top devices that allowed us to type our copy onto floppy disks. The newsroom got significantly quieter at deadline time.

I moved in 1984 to a much larger newspaper in Beaumont, Texas, which had a significantly more advanced computer system. I stayed there nearly 11 years while the newspaper improved its publishing system along the way.

In 1995, I gravitated to my final stop in daily print journalism, moving to Amarillo, Texas, which had a publishing system named after the corporate owners: the Morris Publishing System. It was crappy. Morris Communications ditched that system to something much more workable.

My daily print career ended in the summer of 2012.

This is my way of chronicling all the changes I endured during nearly four decades in journalism. Typewriters to floppy disks to main frame computers to PCs. Now they’re taking pictures with smart phones in the field; they’re using Twitter, Instagram and assorted other media platforms to transmit the news.

It makes my head spin. Then again, my head spun plenty of times as I made my way through a craft I loved pursuing.

Today, I feel a bit like a dinosaur. I just don’t want to become extinct.