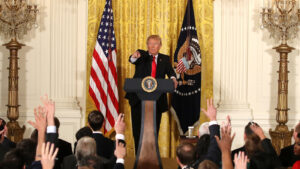 The criticism from right-wing media that President Biden isn’t talking as freely to reporters as his presidential predecessor is unfair to the point of being outrageous.

Donald Trump became (in)famous for spouting off to the media whenever someone showed up with a notebook, a microphone and a TV camera. He would ramble on and on, saying virtually nothing of substance and often would spout a lie or three while yapping to the media.

It was all a show, given that he labeled the media “the enemy of the people” and the purveyor of “fake news.”

Joe Biden prefers to let the White House press secretary, Jan Psaki, do the talking. I am all right with that as long as Psaki tells us the truth. I get that she has been needled for muttering too many “I’ll have to circle back” responses to questions she cannot answer directly.

President Biden is going to stage his first full-blown presidential news conference later this week. It’ll be something of a show, replete with a bit of presidential pomp and panache. Now that I think about it, we might see a bit of a return to the way President Kennedy would demonstrate his legendary quick wit, turning his press briefings into media events.

It’s all OK with me. Just make sure, Mr. POTUS, that your press flack tells us the truth when the media push her for answers.

One thought on “Biden gets unfair criticism on this point”