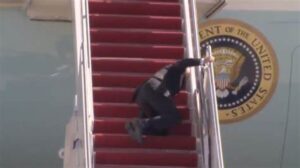 Wait for it, everyone.

President Biden was running up the stairs to step aboard Air Force One when he stumbled a bit. Then he did it twice more.

Did the president fall on his face? Did he topple onto the steps? No. He didn’t. He got up. Walked the rest of the way. Stood for a moment at the door and snapped a salute to the military honor guard that awaited him. Then he walked into the massive jet and flew off to Atlanta, where he offered words of comfort and support to a community shaken by the massacre that killed eight people.

What, then, awaits us? It’ll be the endless string of social media memes that poke fun at the president.

Hey, I am commenting on it with this blog post, which I suppose tells you that it kind of interests me, too.

I just don’t want to see President Biden lampooned the way, uh, President Ford was many decades ago because he took a nasty fall while descending the steps of Air Force One.

It’s yet another sign of the times. Mr. President, get used to it.