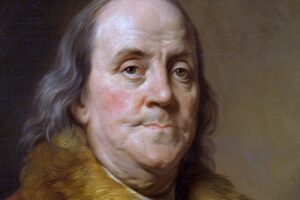 Benjamin Franklin well might be my favorite Founding Father.

He was an inventor, a diplomat, a writer, a statesman, a scientist and a man of impeccable vision. He was 70 years old and in poor health when he put his name on the Declaration of Independence.

But he knew the value of free speech and vigorous political discourse. A quote from ol’ Ben appeared this week in the Princeton (Texas) Herald that I want to share:

“Freedom of speech is a principal pillar of a free government; when this support is taken away, the constitution of a free society is dissolved, and tyranny is erected in its ruins. Republics … derive their strength and vigor from a popular examination into the action of the magistrates.”

Franklin’s wisdom is worth sharing today because of the battering that free speech and expression has taken in recent years. We’ve just been through a horrendous political era in which the nation elected a man with no understanding of government and of the precepts that drive it. Donald Trump encouraged his followers to “beat the  hell” out of protesters at his rallies. He called the press the “enemy of the people.” He abhors criticism directed at him in any form and along the way developed a following of like-minded individuals who adhere to his strange and dangerous notion of a democratic society.

Benjamin Franklin had it exactly right when he wrote the words I have copied.

Franklin knew about the inherent strength that democracies get from “a popular examination into the action of the magistrates.” My goodness, the very First Amendment to our Constitution guarantees the right of citizens to “peaceably … assemble, and to petition government for a redress of grievances.”

We have heard plenty of talk about the “peaceable” part of protesting. It gets out of hand at times. Violence is not the answer and those of us who value what Benjamin Franklin believed abhor the violence that occasionally erupts when citizens get angry.

I am going to set the insurrection of Jan. 6 aside from this discussion. It was a singularly heinous act by a mob of terrorists who had no intention of seeking a peaceful solution to their grievances.

As we move forward from that horrifying event, let us not lose sight of the principle on which the founders — such as the great Benjamin Franklin — created this government. It is that we are allowed to protest what our government does in the performance of its duties.

The end result of Franklin’s wisdom is the realization that we are the bosses of those we select to represent us.