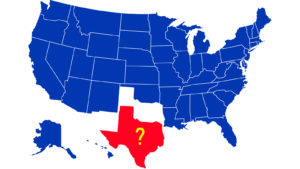 It’s close being declared official, that the Texas Republican Party has lost what passes for its mind. Hey, maybe it already is an official declaration!

Get a load of this: the Texas GOP has signed on to a proposal to allow Texans to vote on whether the state should secede from the Union and form an independent nation.

The Guardian reports: In a talk show interview, the party chair, Allen West, argued that: “Texans have a right to voice their opinions on [this] critical issue.

Allen West is out of his mind. He has gone around the bend. His butter has slipped off his noodle.

What are we to expect from a one-term Florida congressman who moved to Texas specifically to hijack the state GOP. Oh, I should also mention that he resigned from the Army after being accused of mistreating Iraqi prisoners of war during the Iraq War.

Now he is lending his voice to the craziest notion since, oh, the last time Texas seceded from the U.S. of A., in 1861, when it joined the Confederate States of America, which then lost the Civil War, the bloodiest armed conflict in our nation’s history!

This secession issue has been around ever since. It keeps cropping up during Texas legislative sessions. Kinda like the way fire ant mounds pop up after a spring thunderstorm.

The Texas Tribune reported in January that secession is illegal.

Texas can’t secede from the U.S. Here’s why. | The Texas Tribune

You don’t have to take my word for it; a lot of brainiacs have said that any notion that Texas can secede is the stuff of lunatics.

When in the name of political sanity is the Texas Republican Party going to pull its head out of its a**? Ever?