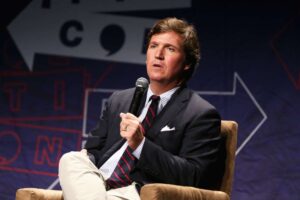 Tucker Carlson is a right-wing gasbag who quite often bloviates on matters of which he knows nothing.

I’m a bit late entering this kerfuffle, but Carlson has waded into a thicket that has drawn deserved scorn from military veterans.

The Fox News blowhard had the stones to say the other day that women who serve in the military downgrade the quality of the nation’s fighting force. He had the very bad taste to suggest that pregnant women in particular are a detriment to this nation’s readiness.

Whoa! Dude, you stepped in it.

You see, Carlson never has served a single nanosecond in the nation’s military. Thus, he has no actual knowledge of the military culture, let alone the value that all our men and women bring to the defense of the nation.

Career military officers and non-commissioned officers alike have slammed Carlson for his remarks. I want to join them in that rebuke.

I need to stipulate that I served at a time — from 1968 to 1970 — before women became integrated fully into all the military occupational specialties that the Army offers. However, I do retain some familiarity with the culture that drives the military. I have no doubt as to the readiness of our nation’s armed forces, which are the most formidable on Planet Earth; and, yes, the women who serve contribute to our nation’s readiness.

And I speak with personal knowledge that a dear member of my family, a woman who served with valor and honor in combat in Iraq and Afghanistan, is every bit as capable as any man with whom she served in the United States Army.

Tucker Carlson would do well to examine his own qualifications before he pontificates on matters with which he has no experience.