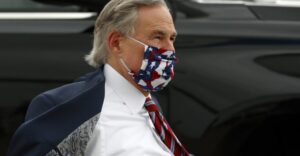 Something has happened to the individual who was most recently elected as Texas governor. I refer to Greg Abbott, a Republican who is set to run for re-election in 2022 to his third term.

His behavior has disappointed me greatly. I now will explain why.

I have met Greg Abbott on numerous occasions. I was a journalist working at the Amarillo Globe-News in the Texas Panhandle. Abbott would visit the newspaper while he was running for election or re-election as a Texas Supreme Court justice and then as Texas attorney general.

I resigned from the newspaper in August 2012, so I did not know him while he ran for governor the first time in 2014.

The Greg Abbott that I got to know over the years did not display the kind of petulance I have been seeing in the man who became our state’s governor. He was gracious, a gentleman, a consummate professional. I knew him to be a man of good humor who delivered direct answers to direct questions, which is a trait I valued then as a journalist. He didn’t flimflam me with double-talk.

So I am now left to ask: What the hell has become of this guy?

His recent decision to rescind a mask-wearing order he issued as the state began battling the COVID virus brought a fairly harsh reaction from President Biden, who called it a form of “Neanderthal thinking.” Abbott’s response was to go on Fox News and say that Biden’s immigration policies have contributed to any surge in COVID virus cases along our southern border.

It took Abbott next to forever to even acknowledge that Joe Biden won the 2020 election. Perhaps I should have noticed this mean streak when Abbott served as Texas AG, as he was continually suing the Barack Obama administration over immigration matters and over implementation of the Affordable Care Act.

It has gotten worse, from my perspective, since he became governor.

To be candid, Gov. Abbott is sounding more like some right-wing crackpot than the reasonable, circumspect man I thought I knew when he held less-visible political offices.