The TV cameras didn’t allow us to watch the members of the U.S. Senate jury that heard the arguments presented by the House of Reps’ managers prosecuting the case against Donald J. Trump.

The managers wrapped up their presentation today in the second impeachment trial of Trump, who is accused of inciting an insurrection. It occurred on Jan. 6. The mob stormed Capitol Hill seeking to prevent Congress from certifying the 2020 presidential election results.

Some reporting from the Senate, though, takes me back to something I witnessed in early 2019 in Amarillo, while covering a school board meeting. I’ll get to that in a second.

The Senate reporting tells us how Republican senators looked away from the hideous video of the riot presented by the House managers. They were seen doodling on note pads, leaving the Senate altogether, looking away, not paying attention to what senators were asked to watch. Why is that? They appear to be hiding from the reality of the ghastly insurrection for which Donald Trump stands accused of inciting. 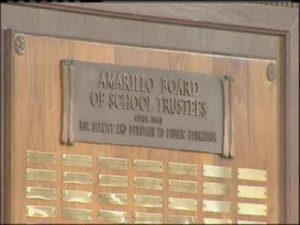 In January 2019, my wife and I traveled back to Amarillo — where we lived for 23 years — to visit our son. The Amarillo public school district’s board was meeting one night. The board had just received a resignation letter from a high school girls volleyball coach, Kori Clements, who accused one of the school trustees of bullying her and of interfering in her coaching decisions. The trustee’s daughter played on the high school team and she believed the coach wasn’t giving her little darlin’ enough playing time.

The school board had a public hearing one evening. Residents were invited to speak to the board about the coach’s resignation, which caused quite an uproar in the community.

Every one of the residents who spoke to the board scolded them for the way the coach was treated. They admonished the trustee in question — Renee McCown, who has since resigned — for her conduct in pressuring the coach, forcing her to resign from a vaunted high school athletic program.

Where am I going with this? McCown never looked up from whatever she was looking at while her bosses — the taxpayers — were scolding her; nor did her board colleagues. They all should have looked them in the eye. I thought at the time it was a disgraceful display of arrogance. And I said so.

The same sort of arrogance played out in the Senate as GOP senators didn’t bother to look at the horror that an ex-president wrought with his inciteful rhetoric.