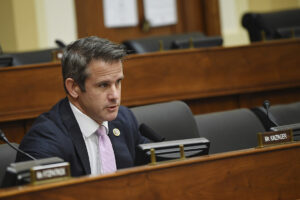 Adam Kinzinger has joined Liz Cheney in the purgatory pit of the once-Grand Old Party.

What did the two Republican members of Congress do to qualify for the roles as political pariahs? All they did was stand by the Constitution and vote to impeach Donald J. Trump while Trump was still president of the United States.

They aren’t the only lawmakers headed to the Trump cultists’ version of hell. Eight others also voted with their Democratic colleagues on Jan. 13 to impeach Trump for the second time in his term as president.

Cheney’s tenure as the No. 3 ranking member of the GOP caucus is now being threatened by the Trump suck-ups within Congress. Rep. Matt Gaetz of Florida ventured to Wyoming to drum up support for someone to mount a primary challenge against Rep. Cheney in 2022.

We are witnessing in real time the cratering of a once-great political party. Adam Kinzinger is looking to create a new conservative political action committee dedicated to what he calls real conservative values.

Politico reported: “Look it’s really difficult. I mean, all of a sudden imagine everybody that supported you, or so it seems that way, your friends, your family, has turned against you. They think you’re selling out,” the Illinois congressman said on NBC’s “Meet the Press.”

Rep. Kinzinger: They claim ‘I’m possessed by the devil’ – POLITICO

The visible and conscious anger being expressed by many Republicans against those who dared to challenge their guy in the White House has drawn some fierce push back in the media … from some surprising sources, I should add.

Chris Wallace, the Fox News Channel stalwart, over the weekend suggested that Republicans should devote more of their energy toward condemning the spewage that comes from QAnon conspiracist Rep. Marjorie Taylor Greene and less time criticizing those who followed their conscience and the Constitution in impeaching Donald Trump.

Adam Kinzinger’s family and friends accuse of him being “possessed by the devil.” That kind of idiocy tells me all I need to know about what has infected the GOP.

One thought on “Welcome to the pit, Rep. Kinzinger”