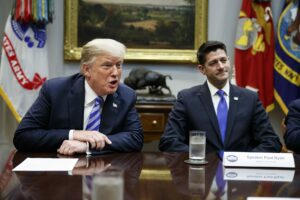 Ryan believes they have embarked on an “un-American,” and “anti-conservative” strategy while seeking to overturn the results of the 2020 presidential election.

Of course he is correct. One big problem exists, however. They don’t give crap what the former speaker thinks of their shenanigans.

According to Business Insider: “All our basic rights and freedoms flow from a fidelity to the Constitution and the rule of law,” Ryan, who represented Wisconsin in the House from 1999 until 2019, said in a statement. “This principle is not only fundamentally American but a central tenet of conservatism. Under our system, voters determine the president, and this self-governance cannot sustain itself if the whims of Congress replace the will of the people. I urge members to consider the precedent that it would set.”

Do you think any of the nimrods who are seeking to challenge President-elect Biden’s victory when Congress meets this week to certify the Electoral College tally from the election will heed these words?

Nope. They are hellbent on shaming the nation.