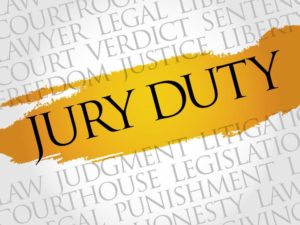 A longtime dream of mine took a baby step toward coming true today when I fetched the mail from the mailbox.

It contained a jury summons from the Collin County Courthouse.

The dream involves serving on a trial jury. I long have wanted to perform that particular act of citizenship.

I came of age in my native Oregon. I never got a summons, not from Multnomah County or from Clackamas County, where we lived until we moved to Texas in 1984.

I would get a summons from Jefferson County on occasion, but then would be dismissed. We moved eventually to Randall County in the Texas Panhandle in 1995, where I would occasionally receive a jury summons. One time — just once! — I had to report for duty, where I joined other potential jurors waiting to be selected. Then out came District Judge David Gleason to tell us that our services wouldn’t be needed. Every other summons I got from Randall County would result in my being informed that everyone had settled so I didn’t have to report.

We have migrated to Princeton, in Collin County. The summons arrived today. To be honest, this summons doesn’t tell me if I might be called to serve on a district court jury, a court at law jury or a justice of the peace court jury. Does that mean my chances of being called might pan out? I hope it does.

I know you might think I am a bit loony in the noggin, but I want to serve on a jury. I am aware of those who seek exemptions, citing their work or their age or their physical infirmity. The only thing I can claim is my age, given that I am well north of 65 years of age now. I am not going to evade jury duty.

I know the pay ain’t great. It used to be $6 daily. They’ve kicked it up a bit. That doesn’t matter to me in the least.

Don’t mistake me as some sort of do-gooder, although I have been distressed to read over the years about Texas courts struggling to find eligible residents willing to serve on juries. I have long been curious about how jurors interact with each other and with officers of the court.

I hope I get the chance to find out.

2 thoughts on “Is there a trial in my future?”