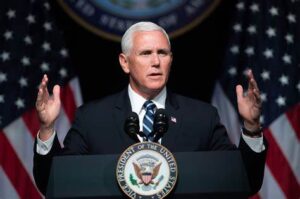 Vice President Mike Pence has one more critical job awaiting him before he leaves office.

He is scheduled — but not required — to preside over a joint session of Congress which on Jan. 6 is going to receive the Electoral College certified tally of the presidential election. It will tally up the votes cast by the electors and then Pence, according to custom, will declare that Joseph Biden and Kamala Harris have been elected president and vice president of the United States of America.

What does the VP do?

That’s easy from my vantage point. He presides over the outcome and makes the declaration on behalf of Congress and the Electoral College.

He is likely, though, to wonder if that’s the correct choice. Of course it is! However, he is likely then to incur the wrath of the man Biden defeated, Donald J. Trump, who continues to bully fellow Republicans to continue resisting the obvious outcome of the election. Trump is seeking to cling to power.

He has lined up a number of GOP loony birds who have swallowed the swill he is serving, that he actually won. To their great credit, some Rs in Congress are urging Trump to give up the fight.

One prominent Republican happens to be Mike Pence, who on Jan. 6 had better do what he must do. If he cannot make the declaration we all intend to hear, he should stand down, step aside and let the speaker of the House, Nancy Pelosi, make the call.

A small, but growing, part of me believes that VP Mike Pence will be AWOL when the moment arrives.