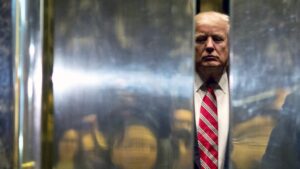 The headline over The Atlantic story says it clearly.

“Trump Is Losing His Mind.”

If we are to believe the New York Times story — and I do believe it — then we now know that Donald Trump has discussed openly the idea of imposing martial law as a way to overturn the results of a free and fair presidential election.

It was an election he lost fair and square to President-elect Joe Biden.

Furthermore, he has considered hiring disgraced lawyer Sidney Powell to serve as special counsel to look directly into the election results. Oh, and there’s more: He brought in his former national security adviser, Michael Flynn, who Trump pardoned for crimes relating to his lying to the FBI over testimony he gave regarding his connection with Russian operatives who attacked our electoral system in 2016.

This came forward after a White House meeting. The NY Times reported it. Trump, of course, calls it “fake news.”

However, I am going to believe the reporting done by the Times. I also am going to endorse the headline atop The Atlantic story.

Donald Trump’s obsession with clinging to power has created a patently dangerous episode within the walls of the White House.

We have to keep our eyes on this guy.

One thought on “POTUS has gone mad”