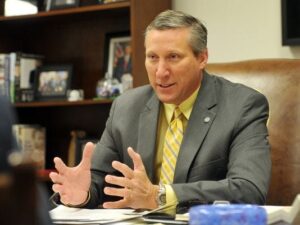 Texas Senate District 30 voters seem to have retained some sanity in what otherwise is a largely insane political climate.

They chose over the weekend to send someone to the Texas Senate with actual government experience rather than select a candidate who was running for office – and this is just my humble opinion – for the purpose of making a spectacle of herself.

The senator-elect is state Rep. Drew Springer, who will succeed U.S. Rep.-elect Pat Fallon. Indeed, it’s been a bit of a musical chairs game in these two Northeast Texas political jurisdictions. Fallon got elected to the Fourth Congressional District seat vacated by John Ratcliffe, who was appointed director of national intelligence by Donald J. Trump. Ratcliffe’s tenure as DNI, of course, is about to end the day that Trump leaves office on Jan. 20; Trump lost the election in November, but I guess you knew that already.

Fallon moves on to Washington, D.C., while Springer moves down the hall in the State Capitol into Fallon’s old seat in the Texas Senate.

Let me be abundantly clear: I am not terribly fond of Drew Springer’s politics. He tilts a bit too far to the right to suit my taste. However, he does bring some political experience and seasoning to his new legislative assignment, unlike the candidate he defeated in the runoff. That would be Dallas salon owner Shelly Luther, who this past summer decided to make a name for herself by defying an order by Gov. Greg Abbott to close her business in the wake of the COVID-19 virus that is still killing Texans at an alarming rate.

No can do, Luther said. She opened her business despite the order … and then got arrested and tossed into jail. Why? Well, because she broke the law, which I figure is enough of a reason to spend a little time in the slammer.

She got out of jail right away and then announced she would run for the Senate. Her platform? It was to send some sort of message that business owners such as herself wouldn’t be pushed around by “tyrants” who are elected to state office. She did concede to Springer but then vowed to keep fighting against that so-called tyrant Gov. Abbott, who to my way of reasoning is trying to save Texans’ lives.

Springer managed to defeat Luther fairly handily, although I hate to acknowledge that Collin County, where my wife and I live, cast most of its votes for Luther. As they might say … “no place is perfect.”

We surely do live in strange political times. I am heartened to see evidence of some semblance of sanity presenting itself in at least one Texas Senate district.

Note: This blog was published initially on KETR-FM radio’s website.