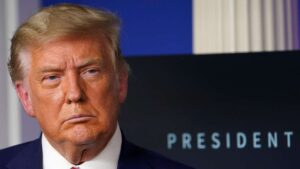 Let us steel ourselves for what I am certain is going to be an incessant drumbeat from those whose candidate for the presidency in 2020 lost the election … by a lot!

It will go something like this: more than 74 million Americans voted for Donald Trump and our voices deserve to be heard; and voices are going to insist that Joe Biden “stole” the election from our guy.

OK. How does one counter such an argument?

I’ll start by reminding anyone who tosses it at me that President-elect Biden garnered more than 81 million votes. He won with a 51.5 percent majority. Biden collected 7 million more votes than Trump. Biden carried 26 of the 50 states, plus the District of Columbia.

I encourage those Trumpkins out there to spare me the argument that for the past four years, many of the anti-Trump forces reminded everyone that in 2016 Hillary Rodham Clinton won more votes than Trump. I have noted that fact on this blog. I have acknowledged — often in the very next sentence — that Trump won where it counted: in the Electoral College. I know what the U.S. Constitution sets out for the election of a president; I honor it and accept that Trump was elected under the rules set forth by our nation’s founders.

So, the Hillary-won-more-votes-than-Trump argument doesn’t hold up. Nor does it matter one damn bit. The issue today is that President-elect Biden won more actual votes than Trump, he captured more than enough electoral votes than Trump and that every bogus legal challenge that Trump has mounted to overturn the results have been tossed out by every court that has heard them. That includes the U.S. Supreme Court.

The mantra will continue at least for the next four years as President Biden and Vice President Kamala Harris seek to repair the damage that Donald Trump inflicted on our democratic process.

I will wait for the bumper stickers to appear as well, although I am not sure how you distill the message of discontent onto a foot-long piece of paper plastered onto a motor vehicle bumper.

Speaking of that, my favorite post-election bumper sticker appeared in the 1970s, about the time President Nixon was being swallowed whole by the Watergate scandal. You’ll recall that Nixon won re-election in 1972 in a historic 49-state landslide. Public opinion turned against the embattled president. Then came the bumper sticker that read: Don’t Blame Me — I’m From Massachusetts … the only state that cast most of its votes in 1972 for George McGovern.

That was then. The here and now presents a whole new set of challenges. One of them likely will be hearing from the losers that their guy didn’t actually lose.

One thought on “Get ready for the losers’ mantra”