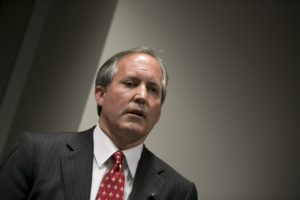 I have concluded, based on zero hard data and only on my inherent bias that I admit to freely, that Texas Attorney General Ken Paxton is hellbent on making a spectacle of himself.

He seeks to bask in some sort of perverse glory derived from Donald Trump’s idiotic pursuit of “widespread voter fraud” where none exists. Thus, Paxton has filed a lawsuit with the U.S. Supreme Court that seeks to overturn the free and fair election results in four states that cast most of their votes for President-elect Joe Biden in the just completed presidential election.

Paxton’s alleged “logic” is beyond belief.

He says the four states — Michigan, Wisconsin, Pennsylvania and Georgia — changed their voting rules in an unconstitutional fashion by allowing more voters to cast their ballots using the U.S. Postal Service. He wants the high court, therefore, to toss out those states’ election returns.

To its credit, the SCOTUS — with three justices nominated by Donald Trump already aboard — has declared already that another lawsuit brought by a Pennsylvania GOP member of Congress has no merit; it has tossed it aside with a single-sentence ruling.

So what the hell is Paxton trying to do here? I mean, the dude already is in trouble already. He is awaiting trial in Texas courts for securities fraud allegations. He also is being investigated by the FBI for allegedly doing favors illegally for a campaign donor. Seven key legal aides have quit or been fired by the AG after they blew the whistle on what they allege is illegal conduct.

The word on Paxton is that he was a mediocre lawyer prior to his election to the Texas Legislature, where he didn’t distinguish himself as the author of much key legislation. Then he got elected Texas AG in 2014 and was almost immediately showered with suspicion when a Collin County grand jury indicted him for securities fraud.

Now this? The AG must have a screw loose.

Let me be as clear as possible: Joe Biden won the election; there is no evidence of the kind of “widespread” fraud that Trump and his Trumpster Team allege. Even the U.S. attorney general, William Barr, has reached that conclusion.

Ken Paxton needs to stop meddling in other states’ affairs.

2 thoughts on “Paxton seeks to bask in some perverse glory”