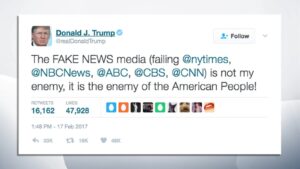 I suppose you could surmise that there is a virtually endless array of things I anticipate with the inauguration of Joe Biden as our next president of the United States.

One of those things is the elimination of certain epithets we hear far too often from the man he will succeed, Donald J. Trump.

I want to discuss one of them briefly here. That would be the term “enemy.”

Biden has said categorically and without equivocation that political foes are not enemies. He has worked through many decades in public service seeking compromise with politicians from the other party. He works well with Republicans while being what he calls himself as being a “proud Democrat.”

The president-elect understands that effective legislation quite often is the result of compromise. He doesn’t see the GOP as comprising enemies. They merely are opponents. Donald Trump exhibited an all-too-often and annoying tendency to cast his foes as enemies.

Indeed, he infamously referred to the media as the “enemy of the American people.” My goodness, it is no such thing. Previous presidents have been made uncomfortable by harsh questions posed by the media. None of them to my knowledge ever referred to reporters as anyone’s “enemy.”

I expect to see President Biden restore the sense of respect we all can have for those with whom we disagree. I also expect to see him eradicate the careless and reckless use of the word “enemy” within the White House.