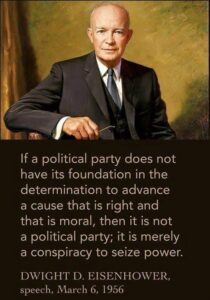 The gentleman in this picture ran twice for president of the United States.

The first time was in 1952; I was a toddler. The second time occurred four years later; I was in the second grade at Harvey W. Scott Elementary School in Portland, Ore. President Eisenhower won both elections in landslides over Adlai Stevenson.

I wasn’t old enough either time to “like Ike,” as the campaign slogan suggested. I do like Ike now as we have suffered through four years of the most hideous individual ever to occupy the office that Dwight Eisenhower once graced.

The text attributed to Ike in the photo above is more profound now, it seems, than when he said it in 1956.

Yes, we have seen Ike’s beloved Republican Party become a vessel for an amoral nincompoop. The man who helped liberate the world from tyranny in World War II and then became our commander in chief just eight years after that terrible conflict would not like what has transpired in the past four years.

He would be heartened, I believe — even with a Democrat, Joe Biden, about to take over — at what we all hope is a restoration of decency and morality in the nation’s highest office.