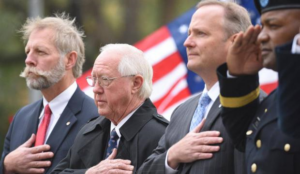 The death of a longtime Texas Panhandle political stalwart brings to mind an axiom that has gotten lost in recent years, which is that people of good faith can disagree but not demonize each other.

So it was with the late Randall County Judge Ernie Houdashell and yours truly. Houdashell died over the weekend. I am still seeking ways to handle my profound grief.

I loved Ernie Houdashell at many levels. I admired his commitment to the county he served; I reveled at his patriotism; I honored his service to his country, serving two tours of duty during the Vietnam War, the second of which exposed him to fierce combat aboard an Army helicopter. I marveled at the creative ways he sought to improve the quality of life for his constituents.

However … I wasn’t a fan of Houdashell’s politics. He was a staunch Republican partisan. I am, shall we say, of a different ilk. I knew Houdashell at two levels: first as a journalist working as editorial page editor of the Amarillo Globe-News; second as a former journalist who maintained a personal friendship with him.

Indeed, our friendship flourished even as we disagreed about the nature of the politics that drove Houdashell and which once consumed many of my waking hours as a full-time opinion journalist.

But we never, ever let our differences interfere with how I felt about him. I hope — and I believed — that he felt the same toward me.

We have seen a diminution of that kind of adversarial relationship in recent years. Ernie and I disagreed fervently about Donald J. Trump. Indeed, I know of several friends who have seen other relationships suffer grievously because of political differences regarding the lame-duck president. Not so with Ernie Houdashell and me.

We were foes. Not enemies.

I am going to cherish that friendship until the very end of my time on this good Earth. If only I could bottle and peddle it to others who suffer from the loss of their own relationships over something as petty as partisan politics.

2 thoughts on “We were foes … not enemies”