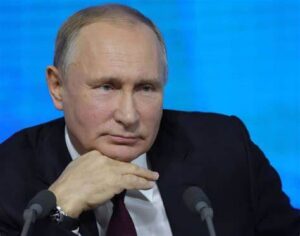 Do you know who among all the world leaders is laughing so hard he is having trouble catching his breath?

It has to be Russian strongman/despot/dictator/former Soviet spy chief Vladimir Putin. That’s who.

Think of it. His boy, Donald Trump, lost his re-election bid for a second term as U.S. president. Trump is refusing to concede to President-elect Joe Biden. He is withholding national security information from the new president’s team. He is fighting the results in courts all over the place; and he’s getting them tossed by judges.

Trump is sowing seeds of discord in our electoral system.

Isn’t that precisely what Putin sought to do in 2016? And again in 2020? Isn’t this kind of activity that former special counsel Robert Mueller III warned us would happen?

Trump is fabricating a story where none exists.

And yet Vladimir Putin must be laughing his keister off as he watches from the Kremlin while Trump continues this ridiculous effort to undermine a political system he took a sacred oath to defend and protect.

I do hope the new president is taking plenty of notes and will get Putin on the phone soon and read him the riot act, warning him of serious consequences for his interference in our electoral system.

One thought on “Putin is laughing his a** off”